Note to the Instructor: This exercise uses the 2014 General Social Survey (GSS) and SDA to explore hypothesis testing and one-way analysis of variance.  SDA (Survey Documentation and Analysis) is an online statistical package written by the Survey Methods Program at UC Berkeley and is available without cost wherever one has an internet connection.  The 2014 Cumulative Data File (1972 to 2014) is also available without cost by clicking here.  For this exercise we will only be using the 2014 General Social Survey.  A weight variable is automatically applied to the data set so it better represents the population from which the sample was selected.  You have permission to use this exercise and to revise it to fit your needs.  Please send a copy of any revision to the author. Included with this exercise (as separate files) are more detailed notes to the instructors and the exercise itself.  Please contact the author for additional information.

The goal of this exercise is to explore hypothesis testing and one-way analysis of variance (sometimes abbreviated one-way anova). The exercise also gives you practice in using MEANS in SDA.

Part I – Populations and Samples

Populations are the complete set of objects that we want to study.  For example, a population might be all the individuals that live in the United States at a particular point in time.  The U.S. does a complete enumeration of all individuals living in the United States every ten years (i.e., each year ending in a zero).  We call this a census.  Another example of a population is all the students in a particular school or all college students in your state.  Populations are often large and it’s too costly and time consuming to carry out a complete enumeration.  So what we do is to select a sample from the population where a sample is a subset of the population and then use the sample data to make an inference about the population. 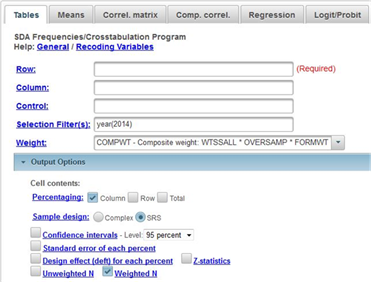 The 2014 GSS includes a variable (degree) that describes the highest degree in school that the person achieved.  The categories are less than high school, high school, junior college, bachelor’s degree, graduate degree.  Another variable is the number of hours per day that respondents say they watch television (tvhours).  We want to find out if there is any relationship between these two variables.  One way to answer this question would be to see if respondents with different levels of education watch different amounts of television.  For example, you might suspect that the more education respondents have, the less television they watch.

Let’s start by getting the means for tvhours broken down by degree.  Click on MEANS in the menu bar at the top of SDA and enter the variable tvhours in the DEPENDENT box.  The dependent variable will always be the variable for which you are going to compute means.  Then enter the variable degree in the ROW box.  This is the variable which defines the groups you want to compare.  In our case we want to compare respondents with different levels of education.  The output from SDA will show you the mean number of hours respondents watched television for each level of education.  Notice that you must enter one or more variables in both the DEPENDENT and ROW boxes.  That what it means when it says REQUIRED next to these boxes.  Your screen should like Figure 8-2. Notice that the SELECTION FILTER(S) box and the WEIGHT box are both filled in.  Be sure to click on OUTPUT OPTIONS and both check SRS STD ERRS.  Click RUN THE TABLE to produce the means.

Respondents with more education watch less television than those with less education.  For example, respondents with a graduate degree watch an average of 1.86 hours of television per day while those who haven’t completed high school watch an average of 3.91 hours – a difference of about two hours.  Why can’t we just conclude those with more education watch less television that those with less education?  If we were just describing the sample, we could. But what we want to do is to make inferences about differences in the population.  We have five samples from five different levels of education and some amount of sampling error will always be present in all these samples.  The larger the samples, the less the sampling error and the smaller the samples, the more the sampling error.  Because of this sampling error we need to make use of hypothesis testing as we did in exercise STAT6S_SDA. 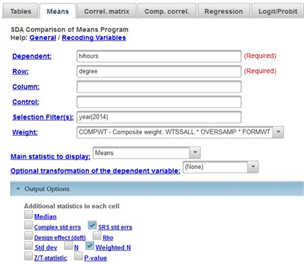 In this part of the exercise you want to determine whether people who live in some regions of the country (region) watch more television (tvhours) than people in other regions.   Use SDA to get the sample means as we did in Part I and then compare them to begin answering this question.  Write one or two paragraphs describing the regions in which people watch more and less television.

In Part I we compared the mean number of hours of television watched per day for different levels of education.  Now we want to determine if these differences are statistically significant by carrying out a one-way analysis of variance.

Click on MEANS in the menu bar at the top of SDA and enter the variable tvhours in the DEPENDENT box as you did in Part I.  This time enter the variable degree in the ROW box.  The SELECTION FILTER(S) box and the WEIGHT box should both be filled in. Be sure to click on OUTPUT OPTIONS and both check SRS STD ERRS and uncheck COMPLEX STD ERRS.  Now we want to determine if the differences between levels of education are statistically significant by carrying out a one-way analysis of variance.  Click on OUTPUT OPTIONS and check the box for ANOVA STATS under OTHER OPTIONS.  Finally, click RUN THE TABLE to carry out the procedure.

Notice how we are going about this.  We have a sample of adults in the United States (i.e., the 2014 GSS).  We calculate the mean number of hours per day that respondents watch television for each level of education in the sample.  But we want to test the hypothesis that the amount respondents watch television varies by level of education in the population.  We’re going to use our sample data to test a hypothesis about the population.

So what have we learned?  We learned that the mean number of hours watching television for at least one of the populations is different from at least one other population.  But which ones?  There are statistical tests for answering this question.  But we’re not going to cover that although your instructor might want to discuss these tests.

In Part II you computed the mean number of hours that respondents watched television for each of the nine regions of the country.  Now we want to determine if these differences are statistically significant by carrying out a one-way analysis of variance as described in Part III.  Indicate what the research and null hypotheses are and whether you can reject the null hypothesis.  What does that tell you about the research hypothesis?