Note to the Instructor: This exercise uses the 2014 General Social Survey (GSS) and SDA to explore bivariate linear regression.  SDA (Survey Documentation and Analysis) is an online statistical package written by the Survey Methods Program at UC Berkeley and is available without cost wherever one has an internet connection.  The 2014 Cumulative Data File (1972 to 2014) is also available without cost by clicking here.  For this exercise we will only be using the 2014 General Social Survey.  A weight variable is automatically applied to the data set so it better represents the population from which the sample was selected.  You have permission to use this exercise and to revise it to fit your needs.  Please send a copy of any revision to the author. Included with this exercise (as separate files) are more detailed notes to the instructors and the exercise itself.  Please contact the author for additional information.

The goal of this exercise is to introduce bivariate linear regression. The exercise also gives you practice using REGRESSION in SDA.

Part I – Finding the Best Fitting Line to a Scatterplot

We’re going to use the General Social Survey (GSS) for this exercise.  The GSS is a national probability sample of adults in the United States conducted by the National Opinion Research Center (NORC).  The GSS started in 1972 and has been an annual or biannual survey ever since. For this exercise we’re going to use the 2014 GSS.  To access the GSS cumulative data file in SDA format click here.  The cumulative data file contains all the data from each GSS survey conducted from 1972 through 2014.  We want to use only the data that was collected in 2014.  To select out the 2014 data, enter year(2014) in the Selection Filter(s) box.  Your screen should look like Figure 14_1.  This tells SDA to select out the 2014 data from the cumulative file. 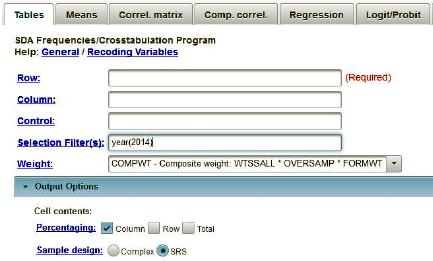 Before we look at these measures let’s talk about outliers. Use FREQUENCIES in SDA to get a frequency distribution for the variable tvhours which is the number of hours that a respondent watches television per day. Click on OUTPUT OPTIONS and check the box for SUMMARY STATISTICS so you will get the skewness and kurtosis measures.  Click also on CHART OPTIONS and then click on TYPE OF CHART and select BAR CHART.  Now click on RUN THE TABLE to produce the frequency distribution and the summary statistics.  Notice that there are only a few people (i.e., 14) who watch 14 or more hours of television per day. There’s even one person who says he or she watches television 24 hours per day. These are what we call outliers and they can affect the results of our statistical analysis.

Let’s exclude these individuals by selecting only those cases for which tvhours is less than 14. That way the outliners will be excluded from the analysis. To do this add tvhours(0-13) to the SELECTION FILTER(S) box.  Be sure to separate year(2014) and tvhours(0-13) with a space or a comma.  This will tell SDA to select out only those cases for which year is equal to 2014 and tvhours is less than 14.  Rerun FREQUENCIES in SDA to get a frequency distribution for tvhours after eliminating the outliers and check to make sure that you did it correctly.

Now we’re ready to find the straight line that best fits the data points. The equation for a straight line is Y = a + bX where a is the point where the line crosses the Y-Axis, b is the slope of the line, and Y is the predicted value of Y. Think of the slope as the average change in Y that occurs when X increases by one unit.[1]

Let’s think about how we’re going to do that. The best fitting line will be the line that minimizes error where error is the difference between the observed values and the predicted values based on our regression equation. So if our regression equation is Y = 10 + 2X, we can compute the predicted value of Y by substituting any value of X into the equation. If X = 5, then the predicted value of Y is 10 + (2)(5) or 20. It turns out that minimizing the sum of the error terms doesn’t work since positive error will cancel out negative error so we minimize the sum of the squared error terms.[2]

The regression equation will be the values of a and b that minimize the sum of the squared errors. There are formulas for computing a and b but usually we leave it to SDA to carry out the calculations.

Click on REGRESSION at the top of the SDA page and enter your dependent variable (tvhours) in the DEPENDENT box.  We’re going to use age as our independent variable so enter age into the INDEPENDENT box.  Make sure that the WEIGHT and SELECTION FILTER(S) boxes are filled in appropriately for both year and age (see instructions in Part I) and that you have selected SRS in the SAMPLE DESIGN line.  Under OTHER STATISTICS uncheck the box for GLOBAL TESTS.  We’ll use this in the next exercise.  Under MATRICES TO DISPLAY, check the box for CORRELATION MATRIX.  Your screen should look like Figure 14-2.  Now click RUN REGRESSION to produce the regression analysis. 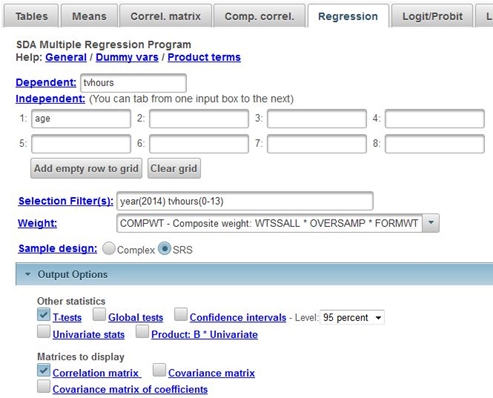 The first three boxes in your output are what you want to look at.

It’s really important to keep in mind that everything we have done assumes that there is a linear relationship between the two variables. If the relationship isn’t linear, then this is all meaningless.

Use the same dependent variable, tvhours, but this time use paeduc as your independent variable. This refers to the years of school completed by the respondent’s father. Tell SDA to give you the regression equation using the same specifications we used in Part II.

[1] For example, a unit could be a year in age or a year in education depending on the variable we are talking about.

[2] When you square a value the result is always a positive number.