Note to the Instructor: This exercise uses the 2014 General Social Survey (GSS) and SDA to explore dummy variable regression.  SDA (Survey Documentation and Analysis) is an online statistical package written by the Survey Methods Program at UC Berkeley and is available without cost wherever one has an internet connection.  The 2014 Cumulative Data File (1972 to 2014) is also available without cost by clicking here.  For this exercise we will only be using the 2014 General Social Survey.  A weight variable is automatically applied to the data set so it better represents the population from which the sample was selected.  You have permission to use this exercise and to revise it to fit your needs.  Please send a copy of any revision to the author. Included with this exercise (as separate files) are more detailed notes to the instructors and the exercise itself.  Please contact the author for additional information.

The goal of this exercise is to introduce dummy variable regression.  The exercise also gives you practice using REGRESSION in SDA.

We’re going to use the General Social Survey (GSS) for this exercise.  The GSS is a national probability sample of adults in the United States conducted by the National Opinion Research Center (NORC).  The GSS started in 1972 and has been an annual or biannual survey ever since. For this exercise we’re going to use the 2014 GSS.  To access the GSS cumulative data file in SDA format click here.  The cumulative data file contains all the data from each GSS survey conducted from 1972 through 2014.  We want to use only the data that was collected in 2014.  To select out the 2014 data, enter year(2014) in the Selection Filter(s) box.  Your screen should look like Figure 16_1.  This tells SDA to select out the 2014 data from the cumulative file. 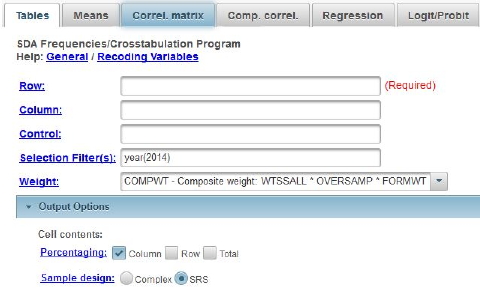 The answer is to create dummy variables.  Consider the respondent’s sex.  Since the variable sex has two categories (i.e., 1 for males and 2 for females), you could create two dummy variables – one for each value.  Your dummy variables would look like this.

In other words, you could create as many dummy variables as there are categories of your variable.

What if you had more than two categories?  For example, the region where the respondent lives (region) has nine categories.  So you could create nine dummy variables and omit one of them.  If we decide to omit the category for the Pacific region (value 9), then you would use eight dummy variables in your regression analysis, one for each of the other categories, and the Pacific region would be our comparison group.

Let’s use tvhours as our dependent variable as we did in the previous two exercises (STAT14S_SDA and STAT15S_SDA).  Run FREQUENCIES in SDA to get the frequency distribution for tvhours.  In the previous exercises we discussed outliers and noted that there are a few individuals (i.e., 14) who watched a lot of television which we defined as 14 or more hours per day.  We also noted that outliers can affect our statistical analysis so we decided to remove these outliers from our analysis.

Let’s exclude these individuals by selecting only those cases for which tvhours is less than 14. That way the outliners will be excluded from the analysis. To do this add tvhours(0-13) to the SELECTION FILTER(S) box.  Be sure to separate year(2014) and tvhours(0-13) with a space or a comma.  This will tell SDA to select out only those cases for which year is equal to 2014 and tvhours is less than 14.  Run FREQUENCIES in SDA to get a frequency distribution for tvhours after eliminating the outliers and check to make sure that there are no values greater than 13.

Click on REGRESSION at the top of the SDA page. To create the dummy variables you enter the variable name in the INDEPENDENT box.[1]  For example, enter sex in the INDEPENDENT box.  Following the variable name, enter (m:X) where X stands for the code or value of the category that you want to omit.  For example, if you entered sex(m:2) that would mean that you are omitting the dummy variable for code or value 2 (i.e., females).  So females becomes your comparison group.

Click on REGRESSION at the top of the SDA page and enter your dependent variable (tvhours) in the DEPENDENT box.  Enter the instructions for creating the dummy variable in the INDEPENDENT box.  In our case, we would enter sex(m:2).  (Don’t enter the period.)  Make sure that the WEIGHT and SELECTION FILTER(S) boxes are filled in appropriately for both year and age (see instructions in Part I) and that you have selected SRS in the SAMPLE DESIGN line.  Under MATRICES TO DISPLAY, check the box for CORRELATION MATRIX.  Under OTHER STATISTICS, uncheck the GLOBAL TESTS box which we won’t need in this analysis.  Your screen should look like Figure 16-2.  Now click RUN REGRESSION to produce the regression analysis. 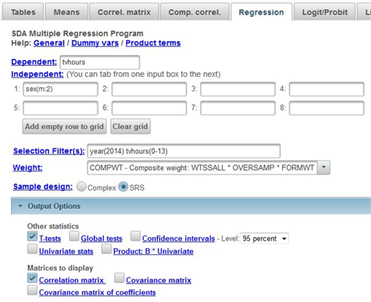 SDA will also calculate t tests to test the null hypotheses that the regression coefficients in the population are equal to 0.  Normally we’re only interested in the slope.  The t value for B is 1.301 and the significance value is .194.  This means that we can’t reject the null hypothesis.  In others words, we have no basis for asserting that the population slope is significantly different from zero.  The Pearson Correlation Coefficient Squared tells us that the dummy variable for sex explains virtually none of the variation in the dependent variable.

Use SDA to get the frequency distribution for race.  There are three categories for this variable – white (value 1), black (value 2), and other (value 3).  We want to compare whites with non-whites.  This means that there will be two dummy variables:

[2] The difference between .129 and 0.13 is due to the fact that SDA calculated the means to two decimal points and the regression coefficient to three decimal points.