Note to the Instructor: This exercise uses the 2014 General Social Survey (GSS) and SDA to explore Chi Square.  SDA (Survey Documentation and Analysis) is an online statistical package written by the Survey Methods Program at UC Berkeley and is available without cost wherever one has an internet connection.  The 2014 Cumulative Data File (1972 to 2014) is also available without cost by clicking here.  For this exercise we will only be using the 2014 General Social Survey.  A weight variable is automatically applied to the data set so it better represents the population from which the sample was selected.  You have permission to use this exercise and to revise it to fit your needs.  Please send a copy of any revision to the author. Included with this exercise (as separate files) are more detailed notes to the instructors and the exercise itself.  Please contact the author for additional information.

The goal of this exercise is to introduce Chi Square as a test of significance.  The exercise also gives you practice in using CROSSTABS in SDA.

We’re going to use the General Social Survey (GSS) for this exercise.  The GSS is a national probability sample of adults in the United States conducted by the National Opinion Research Center (NORC).  The GSS started in 1972 and has been an annual or biannual survey ever since. For this exercise we’re going to use the 2014 GSS.  To access the GSS cumulative data file in SDA format click here.  The cumulative data file contains all the data from each GSS survey conducted from 1972 through 2014.  We want to use only the data that was collected in 2014.  To select out the 2014 data, enter year(2014) in the Selection Filter(s) box.  Your screen should look like Figure 10_1.  This tells SDA to select out the 2014 data from the cumulative file.

In the previous exercise (STAT9S_SDA) we used crosstabulation and percents to describe the relationship between pairs of variables in the sample.  But we want to go beyond just describing the sample.  We want to use the sample data to make inferences about the population from which the sample was selected.  Chi Square is a statistical test of significance that we can use to test hypotheses about the population.  Chi Square is the appropriate test when your variables are nominal or ordinal (see exercise STAT1S_SDA).

Run CROSSTABS in SDA to produce the crosstabulation of abany and sex.  Click on OUTPUT OPTIONS and look at PERCENTAGING.  Since your independent variable is in the column, you want to use the column percents.  By default, the box for column percents is already checked. Your screen should look like Figure 10-2. Notice that the SELECTION FILTER(S) box and the WEIGHT box are both filled in.  Click on RUN THE TABLE to produce the crosstabulation. 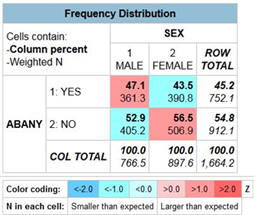 Since your percents sum down to 100% (i.e., column percents), you want to compare the percents across.  Look at the first row.  Approximately 47% of men think abortion should be legal for any reason compared to 44% of women.  This is a difference of 3.6% which seems rather small.  We never want to make too much of small differences.  Why not?  No sample is ever a perfect representation of the population from which the sample is drawn.  This is because every sample contains some amount of sampling error.  Sampling error is inevitable.  There is always some amount of sampling error present in every sample.  The larger the sample size, the less the sampling error and the smaller the sample size, the more the sampling error.

SDA will compute Chi Square for you.  Follow the same procedure you used to get the crosstabulation between sex and abany.  Remember to get the column percents.  Click on OUTPUT OPTIONS and then check the box for SUMMARY STATISTICS.  Be sure to select SRS in the SAMPLE DESIGN line.  Finally, click on RUN THE TABLE.

In the SUMMARY STATISTICS part of the output, you’ll see two Chi Squares – Chisq-P and Chisq-LR.  We want to use the first one listed – Chisq-P.  This is usually referred to as the Pearson Chi Square.  The number in parentheses which in this case is 1 is the degrees of freedom.

The value of the Pearson Chi Square is 2.15.  Your instructor may or may not want to go into the computation of the Chi Square value but we’re not going to cover it in this exercise.

Choose any two of the tables from the following list and compare men and women using crosstabulation and Chi Square.

Note the syntax for the recode statement since you will want to use it later.

Enter this into the ROW box and then click on RUN THE TABLE to rerun the crosstab using the recoded sibs.  Now your expected frequencies will be large enough to meet the assumption that all expected values are greater than 5.  Compare the value of Chi Square for the unrecoded sibs with the recoded sibs.  Are they the same?  Why or why not?

[1] The null hypothesis is often called the hypothesis of no difference.  We’re saying that there is no relationship between these two variables.  In other words, there’s nothing there.