Note to the Instructor: This exercise uses the 2014 General Social Survey (GSS) and SDA to explore the concept of spuriousness.  SDA (Survey Documentation and Analysis) is an online statistical package written by the Survey Methods Program at UC Berkeley and is available without cost wherever one has an internet connection.  The 2014 Cumulative Data File (1972 to 2014) is also available without cost by clicking here.  For this exercise we will only be using the 2014 General Social Survey.  A weight variable is automatically applied to the data set so it better represents the population from which the sample was selected.  You have permission to use this exercise and to revise it to fit your needs.  Please send a copy of any revision to the author. Included with this exercise (as separate files) are more detailed notes to the instructors and the exercise itself.  Please contact the author for additional information.

The goal of this exercise is to explore the concept of spuriousness.  We will consider the relationship of religiosity and how respondents feel about controlling the distribution of pornography and test for the possibility that this relationship is spurious due to sex.   The exercise also gives you practice in combining categories of a variable (i.e., recoding) and using CROSSTABS in SDA to explore relationships among variables and to test for spuriousness.

Part I—Religiosity and Control of the Distribution of Pornography

We’re going to use the General Social Survey (GSS) for this exercise.  The GSS is a national probability sample of adults in the United States conducted by the National Opinion Research Center (NORC).  The GSS started in 1972 and has been an annual or biannual survey ever since. For this exercise we’re going to use the 2014 GSS.  To access the GSS cumulative data file in SDA format click here.  The cumulative data file contains all the data from each GSS survey conducted from 1972 through 2014.  We want to use only the data that was collected in 2014.  To select out the 2014 data, enter year(2014) in the Selection Filter(s) box.  Your screen should look like Figure 12_1.  This tells SDA to select out the 2014 data from the cumulative file. 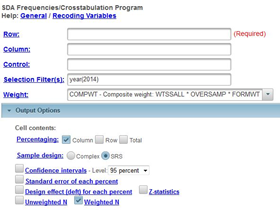 There’s one other thing that it’s important to do.  Click on the arrow next to OUTPUT OPTIONS and look at the line that says SAMPLE DESIGN.  On your screen COMPLEX will be selected.  Click on the circle next to SRS to select it.

What is going to be our measure or indicant of religiosity?  Religiosity refers to the strength of a person’s attachment to their religious preference.  One of the questions in the GSS asks respondents how strong they consider themselves to be in their chosen religion.  The response categories are strong, somewhat strong, not very strong, or they have no religious preference.  This variable is reliten in the data set.

We’re going to recode reliten for this exercise.  Recoding means to combine categories of the variable.  Before we start recoding, run FREQUENCIES in SDA for the variable reliten so you will know what the frequency distribution looks like before you recode.  The value 1 stands for those who say they are strong in their religious preference.  We’re going to leave this category as it is.  Then we’re going to combine somewhat strong (2), not very strong (3) and no religion (4) into one category and assign it a value of 2.  Follow these steps to recode in SDA

After you have recoded this variable, run FREQUENCIES in SDA for the recoded variable reliten.  Your screen should look like Figure 12-2.  Click RUN THE TABLE to produce the frequency distribution.  Compare the two frequency distributions to make sure you didn’t make an error recoding.  If you did make a mistake, you’ll need to do the recoding again. 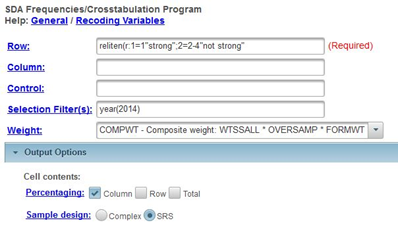 Once you have developed your argument, then you should construct a dummy table showing what the relationship between the recoded variable reliten and pornlaw should look like if your hypothesis is true.  Use “Tables” in Word to construct the table below.  We’re going to always put the independent variable in the column and the dependent variable in the row.  Add arrows to the table to show what your hypothesis would predict.  For example, compare cells a and b.  Would your hypothesis predict that cell a would be greater than cell b or would it predict that a would be less than b?  Do the same thing for cells c and d.  Does your hypothesis make any prediction about cells e and f?  If it doesn’t, then don’t insert an arrow for these two cells.  Copy the table below into your paper and add the arrows indicating the relationship that you expect to find.

Now that you have constructed your dummy table, it’s time to find out what the relationship actually looks like. To do this you will need to run CROSSTABS in SDA.  Be sure to put the recoded variable reliten in the column and the dependent variable pornlaw in the row.  You also need to be sure to get the percents and the SUMMARY STATISTICS.  Since the independent variable is the column variable, you will want the column percents.   Your screen ought to look like Figure 12-3. 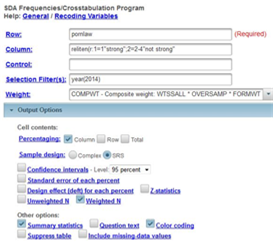 All that is left is to interpret the table.  Since the independent variable is the column variable, we had SPSS compute the column percents.  It’s important to compare the percents across.  What does the table tell you about the relationship between religiosity and control over the distribution of pornography?  Use the percents, Chi Square, and whichever measure of association you think is appropriate to help you interpret the table.

Part II—Adding a Third Variable into the Analysis

At this point we have only considered two variables.  We need to consider other variables that might be related to religiosity and pornography control.  For example, sex may be related to both these variables.  Women may be more likely to say that they are strong in their religion and women may also be more likely to feel that pornography ought to be illegal for all regardless of age.  This raises the possibility that the relationship between self-reported strength of religion and how one feels about pornography laws might be due to sex.  In other words, it may be spurious due to sex.

Let’s check to see if sex is related to both our independent and dependent variables.  This is important because the relationship can only be spurious if the third variable (sex) is related to both your independent and dependent variables.  Use CROSSTABS in SDA to get two tables – one table should cross tabulate sex and pornlaw and the other table should cross tabulate sex and the recoded variable reliten.  Be sure to get the SUMMARY STATISTICS so you will be able to use Chi Square and whichever measure of association you think is appropriate.  If sex is related to both variables, then we need to check further to see if the original relationship between religiosity and pornography control is spurious as a result of sex.

We can do that in SDA by getting a crosstab putting pornlaw in the ROW box (our dependent variable), reliten in the COLUMN box (our independent variable),  and sex in the CONTROL box.  In this case, sex is the variable we are holding constant and is often called the control variable. You will get two tables – one for males and the other for females. Sometimes we call these partial tables since each partial table contains part of the sample.

Check to see what happens to the relationship between strength of religion and opinion on pornography laws when we hold sex constant.  If the original relationship is spurious then it either ought to go away or to decrease substantially for both males and females.  So look carefully at the two tables – one for males and the other for females.  But how can we tell if the relationship goes away or decreases markedly for both males and females?  One clue will be the percent differences.  Compare the percent differences between those who are more religious (i.e., strong) and those who are less religious (i.e., not strong) for males and then for females with the percent differences in the original two-variable table.  Did the percent difference stay about the same or did it decrease substantially?  Another clue is your measure of association.   Did the measure or association for males and females stay about the same or did it decrease substantially from that in the original two-variable table?

Summarize what you learned in this exercise.  What was the original two-variable relationship between religiosity and control over the distribution of pornography?  What happened when you introduced sex into the analysis as a control variable?  Was the original relationship spurious or not?  What does it mean to say a relationship is spurious?