Note to the Instructor: This exercise uses the 2014 General Social Survey (GSS) and SDA to explore measures of correlation.  SDA (Survey Documentation and Analysis) is an online statistical package written by the Survey Methods Program at UC Berkeley and is available without cost wherever one has an internet connection.  The 2014 Cumulative Data File (1972 to 2014) is also available without cost by clicking here.  For this exercise we will only be using the 2014 General Social Survey.  A weight variable is automatically applied to the data set so it better represents the population from which the sample was selected.  You have permission to use this exercise and to revise it to fit your needs.  Please send a copy of any revision to the author. Included with this exercise (as separate files) are more detailed notes to the instructors and the exercise itself.  Please contact the author for additional information.

The goal of this exercise is to introduce measures of correlation. The exercise also gives you practice using CORRELATION MATRIX in SDA.

Part I – Getting Started

We’re going to use the General Social Survey (GSS) for this exercise.  The GSS is a national probability sample of adults in the United States conducted by the National Opinion Research Center (NORC).  The GSS started in 1972 and has been an annual or biannual survey ever since. For this exercise we’re going to use the 2014 GSS.  To access the GSS cumulative data file in SDA format click here.  The cumulative data file contains all the data from each GSS survey conducted from 1972 through 2014.  We want to use only the data that was collected in 2014.  To select out the 2014 data, enter year(2014) in the Selection Filter(s) box.  Your screen should look like Figure 13.1-1.  This tells SDA to select out the 2014 data from the cumulative file.

In a previous exercise (STAT11S_SDA) we considered different measures of association that can be used to determine the strength of the relationship between two variables that have nominal or ordinal level measurement (see exercise STAT1S_SDA). In this exercise we’re going to look at two different measures that are appropriate for interval and ratio level variables. The terminology also changes in the sense that we’ll refer to these measures as correlations rather than measures of association.

Let’s get the Pearson Coefficient for two variables that measure the amount of education of the respondent’s father and mother.  These variables are named maeduc and paeduc in the GSS.  Click on CORRELATION MATRIX at the top of the SDA screen and enter the two variables in the dialog box.  It doesn’t matter which you enter first.  Notice that the SELECTION FILTER(S) and the WEIGHT boxes are filled in.  Also notice that SDA has checked the box for the Pearson Correlation which is what we want.  Listwise has been selected in the MISSING-DATA EXCLUSION box.  That means that any case with missing data for either of these two variables will be excluded from analysis.  Your screen should look like Figure 13.1-2.  Now click on RUN CORRELATIONS to produce the Pearson Correlations. 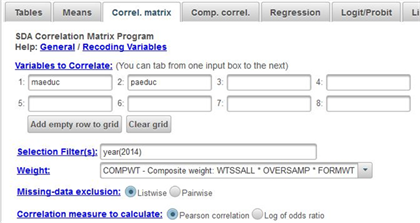 What if you wanted to see the values of r for a set of variables? Let’s think of the four variables in Parts 2 and 3 as a set. That means that we want to see the values of r for each pair of variables. This time move all four of the variables into the VARIABLES TO CORRELATE box (i.e., educ, maeduc, paeduc, and speduc) and click on RUN CORRELATIONS.   That would mean we would calculate six coefficients. (Make sure you can list all six.)

The Pearson Correlation Coefficient assumes that both variables are interval or ratio variables (see STAT1S_SDA). But what if one of the variables was nominal or ordinal and the other variable was interval or ratio? This leads us back to one-way analysis of variance which we discussed in exercise STAT8S_SDA.

Click on MEANS in the menu bar at the top of SDA and enter the variable tvhours in the DEPENDENT box and degree in the ROW box.  The SELECTION FILTER(S) and the WEIGHT boxes should still be filled in.  In STAT8S_SDA we wanted to determine if the differences between levels of education are statistically significant so we carried out a one-way analysis of variance.  Make sure that the MEAN STATISTIC TO DISPLAY box says MEANS.  This is the default so it should.  Then click on OUTPUT OPTIONS and check the box for ANOVA STATS under OTHER OPTIONS.  Be sure to uncheck the box for COMPLEX STANDARD ERRORS and check the box for SRS STANDARD ERRORS.  Finally, click RUN THE TABLE to carry out the procedure.

The F test in the one-way analysis of variance tells us to reject the null hypothesis that all the population means are all equal. So we know that at least one pair of population means are not equal. But that doesn’t tell us how strongly related these two variables are. The SDA output tells us that eta-squared is equal to .051. You should be able to locate this in the Analysis of Variance output table.  This tells us that 5.1% of the variation in the dependent variable, number of hours the respondent watches television, can be explained or accounted for by the independent variable, highest education degree. This doesn’t seem like much but it’s not an atypical outcome for many research findings.

In exercise STAT8S_SDA you computed the mean number of hours that respondents watched television (tvhours) for each of the nine regions of the country (region). Then you determined if these differences were statistically significant by carrying out a one-way analysis of variance. Repeat the one-way analysis of variance but this time focus on eta-squared. What percent of the variation in television viewing can be explained by the region of the country in which the respondent lived?