Note to the Instructor: This exercise uses the 2014 General Social Survey (GSS) and SDA to explore crosstabulation.  SDA (Survey Documentation and Analysis) is an online statistical package written by the Survey Methods Program at UC Berkeley and is available without cost wherever one has an internet connection.  The 2014 Cumulative Data File (1972 to 2014) is also available without cost by clicking here.  For this exercise we will only be using the 2014 General Social Survey.  A weight variable is automatically applied to the data set so it better represents the population from which the sample was selected.  You have permission to use this exercise and to revise it to fit your needs.  Please send a copy of any revision to the author. Included with this exercise (as separate files) are more detailed notes to the instructors and the exercise itself.  Please contact the author for additional information.

The goal of this exercise is to introduce crosstabulation as a statistical tool to explore relationships between variables.  The exercise also gives you practice in using CROSSTABS in SDA.

In exercises STAT6S_SDA and STAT8S_SDA we used sample means to analyze relationships between variables.  For example, we compared men and women to see if they differed in the number of years of school completed and the number of hours they worked in the previous week and discovered that men and women had about the same amount of education but that men worked more hours than women.  We were able to compute means because years of school completed and hours worked are both ratio level variables (see STAT1S_SDA) The mean assumes interval or ratio level measurement (see STAT2S_SDA).

But what if we wanted to explore relationships between variables that weren’t interval or ratio?  Crosstabulation can be used to look at the relationship between nominal and ordinal variables.  Let’s compare men and women (sex) in terms of the following.

Let’s start with the first two variables in our list.  We’re going to use abany as our measure of opinion about abortion.  Respondents were asked if they thought abortion ought to be legal for any reason.  And we’re going to use fear as our measure of fear of crime.  Respondents were asked if they were afraid to walk alone at night in their neighborhood.  Run CROSSTABS in SDA to produce two tables.  One will be for the relationship between sex and abany.  The other will be for sex and fear.  Put the independent variable in the column and the dependent variable in the row.  SDA can compute the row percents, column percents, and total percents.  Click on OUTPUT OPTIONS and look at PERCENTAGING.  By default, the box for column percents is already checked. Your screen should look like Figure 9-2.

Your instructor will probably talk about how to compute these different percents.  But how do you know which percents to ask for?  Here’s a simple rule for computing percents.

Since you put the independent variable in the column, you want the column percents. 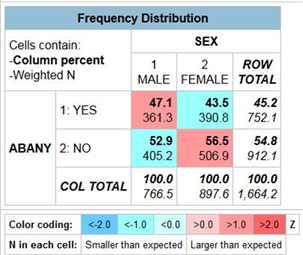 It’s easy to make sure that you have the correct percents.  You independent variable (sex) should be in the column and it is.  Column percents should sum down to 100% and they do.

How are you going to interpret these percents?  Here’s a simple rule for interpreting percents.

Since the percents sum down to 100%, you want to compare across.

Look at the first row.  Approximately 47% of men think abortion should be legal for any reason compared to 44% of women.  There’s a difference of 3.6% which is really small.  We never want to make too much of small differences.  Why not?  No sample is ever a perfect representation of the population from which the sample is drawn.  This is because every sample contains some amount of sampling error.  Sampling error in inevitable.  There is always some amount of sampling error present in every sample.  The larger the sample size, the less the sampling error and the smaller the sample size, the more the sampling error.  So in this case we would conclude that there probably isn’t any difference in the population between men and women in their approval of abortion for any reason. 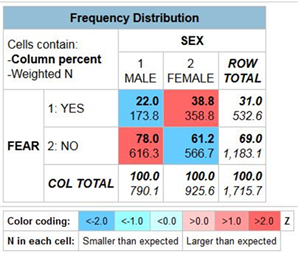 This time the percent difference is quite a bit larger.  About 22% of men are afraid to walk alone at night in their neighborhood compared to 39% of women.  This is a difference of 16.8%.  This is a much larger difference and we have reason to think that women are more fearful of being a victim of crime than men.

Choose two of the tables from the following list and compare men and women.

Part IV – Adding another Variable into the Analysis

So far we have only looked at variables two at a time.  Often we want to add other variables into the analysis.  Let’s focus on the difference between men and women (sex) in terms of gun ownership (owngun).  You might have run this table in Part III.  If not, run the crosstab now.  Here’s what you table should look like. 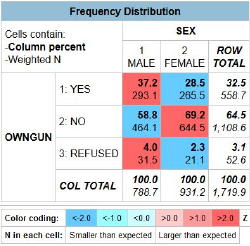 Notice that in this table “refused (3)” is in the rows.  This is an example of missing data and we want to remove these cases from the table.  We can do this by restricting the range for the variable owngun to the values 1 and 2.  Enter the following into the row box – owngun(1-2).  Now rerun the table and it ought to look like Figure 9-6. 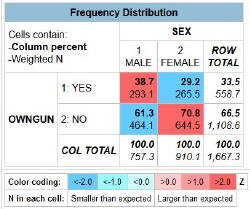 Men were more likely to own guns by 9.5%.  But what if we wanted to include social class in this analysis?  The 2014 GSS asked respondents whether they thought of themselves as lower, working, middle, or upper class.  This is the variable class.  What we want to do is to hold constant perceived social class.  In other words, we want to divide our sample into four groups with each group consisting of one of these four classes and then look at the relationship between sex and owngun separately for each of these four groups.

We can do this by going back to the SDA dialog box where we requested the crosstabulation and putting the variable class in the CONTROL box right below the COLUMN box.  Click on RUN THE TABLE to produce the results.  Your tables should look like Figure 9-7. 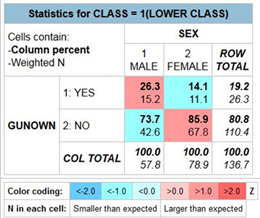 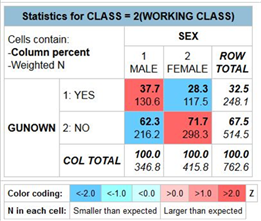 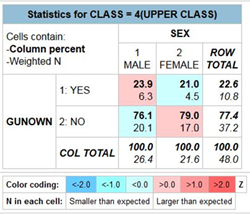 This table is more complicated.  Notice that there are actually four tables.  We often call them partial tables since each table contains part of the total sample.  One of the tables is for those who said they were lower class, then working, middle and upper class.  Let’s look at the percent differences for each of these tables – 12.2% (lower), 9.4% (working), 9.6% (middle), and 2.9% (upper).  The first three tables are similar to the two-variable table – 9.5% compared to 12.2%, 9.4%, and 9.6%.  The last table for upper class has a much smaller difference – 2.9%.   We need to remember not to make too much out of small differences because of sampling error.  In other words, when we look at only those who see themselves as upper class, there really isn’t much of a difference between men and women in terms of gun ownership.

In Part II we compared men and women (sex) in terms of fear of crime (fear).  Run this table again but this time add social class (class) into the analysis as a control variable as we did in Part IV.  What happens to the percent difference when you hold constant class?  What does this tell you?